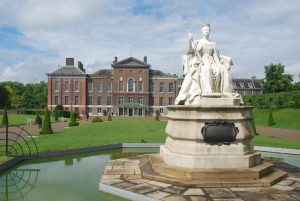 London was the central hub for royalty throughout history and it continues to be today. It is a fantastic place to learn and see into the different lifestyles that were lead through various periods of time. Patrick Sandberg Antiques is situated nearby to one of the best examples of a royal stately home that is also open for public viewing. If you’re considering using 18th century antique furniture within your home and are looking for inspiration of how to dress your room, then Kensington Palace is a must, with the bonus of discovering the royal history while you are there. The significant home has a wide range of fascinating objects, stories and art work that uncover the royal history. The Palace has been open to the public since May 1899 and throughout this time has been regularly used by the Royal family. Many of the exhibits are similar to the original displays, with the most constant including dresses worn by several Queens and Princesses.

One of the many highlights of visiting Kensington Palace is the Diana exhibit. One of the most adored members of the Royal family in history, the People’s Princess spent much of her time at Kensington Palace, from when she married Prince Charles in 1981, to when she sadly died in 1997, it was her preferred place of residence for many of her years that were spent in the public eye. The exhibit showcases some of the most iconic outfits she had worn at various high profile events, including the Royal Ballet, Buckingham Palace, the Whitehouse and numerous charity events. Diana’s funeral cortege also left from Kensington Palace.

The Kings Stairway is an impressive mural within Kensington Palace, it was painted by William Kent and completed in 1724. William Kent was a highly skilled and sought after individual; he was accomplished and well recognised as a painter and designer of gardens and furniture. The Kings Stairway is a large, floor to ceiling painting, it shows a very busy court, with children and adults crammed in behind a banister. His work can be seen around London and in other stately homes around the country, the best examples being at Kensington Palace, Houghton Hall and Wanstead House.

There is also artwork and architecture from other well respected painters and designers. Creations from Colen Campbell can be seen; he was famous for creating small and sophisticated structures and was a large influencer of the Palladian architecture in England. Originally trained as a lawyer, he abandoned his profession to pursue a life in architecture, he was self-publicised and the author of many books on the subject.

As you may expect, Kensington Palace has a very striking and stunning garden which is based upon 18th century styles. It is best to visit during the spring and summer as it is during these months that it will be most impressive and flowers are in full bloom. Rotational gardening is practised there so there should always be something beautiful to be seen. Historically, the gardens were much larger than what you will see today, as the neighbouring Hyde Park was part of the grounds, it was separated in 1689. While you wander around and marvel at the magnificence of it all, be sure to view the lake and Orangery which is an ornate greenhouse used for entertaining and afternoon teas on sunny days.

If you want to discover more after your visit, there are several books written on Kensington Palace and the events that have taken place there throughout history. Popular further readings on the topic are ‘T Mowl – William Kent: Architect, Designer, Opportunist’ and ‘C Hibbert – Queen Victoria in Her Letters and Journals: A Selection.’

Kensington Palace is a wonderful place to spend the day, with many intriguing and remarkable objects and stories waiting to be discovered. The range of antiques is incredible and it is a collector’s haven, with scheduled talks throughout the day and many events taking place, you will not be stuck for something to do!

Chinese wooden stands: from accessories to collectibles – Displaying art as part of the creative process 陈列的艺术：扶摇直上的中国古董木雕座